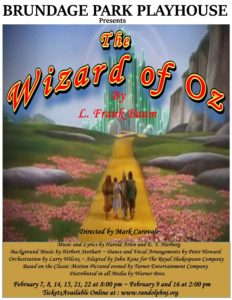 THE WIZARD OF OZ

By L. Frank Baum
With Music and Lyrics by Harold Arlen and E. Y. Harburg
Background Music by Herbert Stothart
Dance and Vocal Arrangements by Peter Howard
Orchestration by Larry Wilcox
Adapted by John Kane for the Royal Shakespeare Company
Based upon the Classic Motion Picture owned by Turner Entertainment Co. and distributed in all media by Warner Bros.

This beloved tale, in which a Kansas farm girl travels over the rainbow to discover the magical power of home, has been entertaining audiences for generations.

Due to the escalation of the COVID-19 outbreak in NJ the following 2 performances have been cancelled: 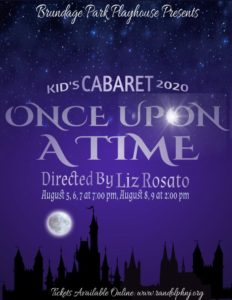 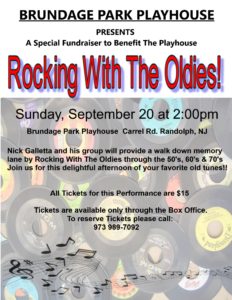 ROCKING WITH THE OLDIES!
SPECIAL FUNDRAISER TO BENEFIT THEATER

Rocking with the Oldies through the 50’s 60’s and 70’s, Nick Galletta and his group will provide a walk down memory lane.  Join us for this delightful afternoon of your favorite old tunes!!!  Tickets for this performance tickets are strictly available through the box office.  Please call 973-989-7092 to reserve tickets.  All tickets for this show are $15 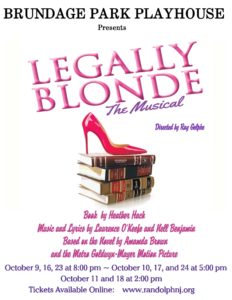 Book by Heather Hach
Music and Lyrics by Laurence O’Keefe and Nell Benjamin
Based on the novel by Amanda Brown and the Metro Goldwyn-Mayer motion picture.

Elle Woods appears to have it all. Her life is turned upside down when her boyfriend Warner dumps her so he can attend Harvard Law. Determined to get him back, Elle ingeniously charms her way into the prestigious law school. While there, she struggles with peers, professors and her ex. With the support of some new friends, though, Elle quickly realizes her potential and sets out to prove herself to the world. 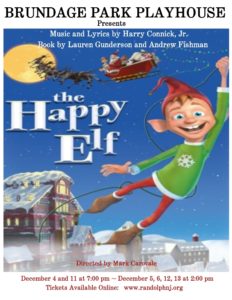 The Happy Elf follows Eubie, the happiest elf at the North Pole. More than anything else, Eubie longs to be a part of Santa’s sleigh team. Instead, he’s stuck checking the naughty-or-nice lists. Then, one Christmas Eve, he sees something strange: in the whole town of Bluesville, not a single person has been nice. With a pinch of elfish magic and a magical whoosh, Eubie’s off to Bluesville. But can he turn a whole town of naughty children nice in just one day?