Fiddler on the Roof

Winner of 10 TONY Awards when it debuted in 1965, Fiddler On The Roof is the brainchild of Broadway legends Jerome Robbins, Harold Prince, songwriters Jerry Bock and Sheldon Harnick, and bookwriter Joseph Stein. A musical theatre tradition, Tevye the milkman tries to protect his daughters and his way of life from a changing world. With iconic and beloved songs such as “Sunrise, Sunset,” “If I Were A Rich Man,” and “Matchmaker, Matchmaker”, Fiddler On The Roof is the perfect mix of audience-pleasing humor and heart. 2015 Performance Dates: February 6, 13, 20 at 8:00 pm, February 7, 8, 14, 15, 21 and 22 at 2:00 pm Directed by Mark Carovale Book by Joseph Stein Music by Jerry Bock Lyrics by Sheldon Harnick Based on Sholem Aleichem's stories by special permission of Arnold Perl
Slideshow
View 24 photos

YOU’RE A GOOD MAN, CHARLIE BROWN (Revised) is a fresh approach to the all-time 1967 classic. The time of the action is “an average day in the life of Charlie Brown.” It really is just that, a day made up of little moments picked from all the days of Charlie Brown, from Valentine’s Day to the baseball season, from wild optimism to utter despair, all mixed in with the lives of his friends (both human and non-human) and strung together on the string of a single day, from bright uncertain morning to hopeful starlit evening. Charlie Brown is joined by his sister Sally, along with his friends Linus, Lucy, Schroeder and Snoopy in this version. Two new songs, Beethoven Day and My New Philosophy, have been added to the twelve wonderful numbers of the original version, such as My Blanket and Me, The Kite, The Baseball Game, Little Known Facts, Suppertime and Happiness
Slideshow
View 41 photos

The classic story of Ebenezer Scrooge, from the Charles Dickens story “A Christmas Carol”. Scrooge is visited by the ghost of his partner Jacob Marley and is told he will be visited later that night by three spirits. If he can alter his miserly ways, Scrooge can change his gloomy fate and escape an eternity of agony.
Slideshow
View 15 photos 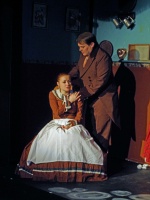 Based on the Disney film and J.M. Barrie's enchanting play, Disney's PETER PAN JR. is a modern version of the timeless tale about a boy who wouldn't grow up. The score includes new arrangements of classic Disney songs, such as "Following the Leader," "You Can Fly," "The Second Star to the Right" and "Yo Ho, A Pirate's Life for Me." Wendy Darling loves to tell stories to her brothers, Michael and John. But when her father announces she must move out of the nursery, Peter Pan comes to visit the children and whisks them away to Never Land. Their adventure introduces them to the Lost Boys, Mermaids, Indians and even the infamous pirate, Captain Hook!
Slideshow
View 16 photos 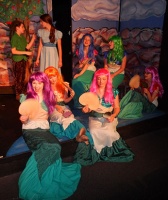 You can't stop the beat in this big and bold musical about one girl's inspiring dream to dance. The 1950's are out and change is in the air! HAIRSPRAY, winner of 8 Tony Awards including Best Musical, is a family-friendly musical piled bouffant high with laughter, romance, and deliriously tuneful songs. It's 1962 in Baltimore, and the lovable plus-size teen Tracy Turnblad has only one desire -- to dance on the popular Corny Collins Show. When her dream comes true, Tracy is transformed from social outcast to sudden star. She must use her newfound power to dethrone the reigning Teen Queen, win the affections of heartthrob Link Larkin, and integrate a TV network, all without denting her 'do!
Slideshow
View 20 photos

As we prepare for the New Year and the beginning of our 2022 season, the health and safety of our patrons, performers, volunteers, students and staff are of critical concern in view of the rising Covid cases in New Jersey.  Our theater’s small footprint, the small size of the trailer, the green room and the tiny backstage area, all make for very close contact for prolonged periods of time during rehearsals and programs.

Beginning January 1, all people auditioning, performing, employed or volunteering at events at Brundage Park Playhouse must show proof of full vaccination prior to entry. The only exceptions are for those who cannot get a vaccine due to medical condition, religion or other valid reason; in those cases you must produce a negative COVID test taken within 48 hours before entering the theater. Masks will be required at all times for everyone while in the building, including children, and may be removed only while engaged in eating or drinking.

More and more artists and venues have made this policy a requirement for performances to take place, in accordance with the advice by medical experts. In order to have a policy consistent with the industry, we have adopted these guidelines. It is the best and safest way to bring you live performances on our stage that protect everyone performing or working events at Brundage.  We will continue to monitor the rapidly changing conditions and review our policy and the recommendations of health experts in order to ensure the safest way to present productions.