October 2016 Directed by Ray Gelpke Millie Dillmount arrives in 1922 Manhattan. She has guts, pluck, charisma, and moxie. She may be from a small town, but she's got big dreams. She's here to make those dreams come true and nothing can deter her or send her running home. Filled with frisky flappers, dashing leading men and a dragon-lady of a villain audiences will love to hate, Thoroughly Modern Millie is a perfectly constructed evening of madcap merriment
Slideshow
View 13 photos 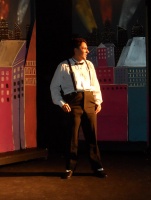 DOCTOR DOLITTLE, JR. Directed by: Mark Carovale Based on the Doctor Dolittle stories by Hugh Lofting and The Twentieth Century Fox Film. A wacky, but kind doctor who can talk to animals, Dr. Dolittle, Jr. takes the audience on a journey from the small English village of Puddleby-On-The-Marsh to the far corners of the world. When Doctor Dolittle attempts to help a seal named Sophie, he's wrongly accused of murder and stands trial before General Bellowes. Once pronounced innocent, Dr. Dolittle is free to continue with his search for the Great Pink Sea Snail - the oldest and wisest of the creatures on earth.
Slideshow
View 9 photos

From the announcement of her death in a movie theater in Buenos Aires in 1952, the Andrew Lloyd Webber and Tim Rice musical retraces Eva’s early life to her meteoric rise to power as the First Lady of Argentina. Narrated by the character of Che, Evita examines the true impact that Eva Peron had on her country through well-known songs such as “Oh, What a Circus”, “Another Suitcase In Another Hall”, and the beloved ballad “Don’t Cry for Me, Argentina.” and many others.
Slideshow
View 20 photos 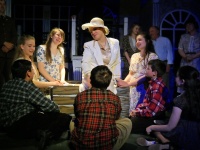 Buddy, a young orphan mistakenly crawls into Santa’s bag of gifts and is transported to the North Pole. The would-be elf is raised unaware that he is actually a human, until his enormous size and poor toy-making abilities cause him to face the truth. With Santa’s permission, Buddy embarks on a journey to New York City to find his birth father and discover his true identity. Faced with the harsh reality that his father is on the naughty list, and his stepbrother doesn’t even believe in Santa, Buddy is determined to win over his new family and help New York remember the true meaning of Christmas.
Slideshow
View 20 photos

A Funny Thing Happened on the Way to the Forum 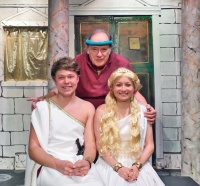 As we prepare for the New Year and the beginning of our 2022 season, the health and safety of our patrons, performers, volunteers, students and staff are of critical concern in view of the rising Covid cases in New Jersey.  Our theater’s small footprint, the small size of the trailer, the green room and the tiny backstage area, all make for very close contact for prolonged periods of time during rehearsals and programs.

Beginning January 1, all people auditioning, performing, employed or volunteering at events at Brundage Park Playhouse must show proof of full vaccination prior to entry. The only exceptions are for those who cannot get a vaccine due to medical condition, religion or other valid reason; in those cases you must produce a negative COVID test taken within 48 hours before entering the theater. Masks will be required at all times for everyone while in the building, including children, and may be removed only while engaged in eating or drinking.

More and more artists and venues have made this policy a requirement for performances to take place, in accordance with the advice by medical experts. In order to have a policy consistent with the industry, we have adopted these guidelines. It is the best and safest way to bring you live performances on our stage that protect everyone performing or working events at Brundage.  We will continue to monitor the rapidly changing conditions and review our policy and the recommendations of health experts in order to ensure the safest way to present productions.